By Andrew Court For Dailymail.com

Austin police are bracing for chaos as heavily-armed activists from rival groups face off in the city one week after a Black Lives Matter protester was shot dead.

On Saturday evening, a group of gun-toting men were seen protecting left-wing demonstrators at a makeshift memorial for Garrett Foster – the 28-year-old who was killed during a BLM march in Austin last weekend.

Across the street, camouflage clad members of the far-right paramilitary group Three Percenters stood watching on, brandishing semiautomatic weapons in an intimidating manner.

Members of another far-right group – Boogaloo Boys – were also spotted cutting an imposing figure at the memorial.

Police have bolstered their forces amid fears that tensions between the two groups could explode.

Austin police are bracing for chaos as heavily-armed activists from rival groups face off in the city one week after BLM protester Garrett Foster was shot dead. Members of the far-right Boogaloo Boys were seen creating an intimidating presence at his memorial on Saturday evening

Black Lives Matter protester Garrett Foster (left) was shot dead last Saturday night as he marched through the city. His wheelchair-bound fiancee Whitney Mitchell (right) was with him at the time

The Austin Police Department released a statement saying they have called in extra cops to help protect both people and property should things go awry.

‘We are bringing in the necessary staff, and have partnered with other local law enforcement agencies as we have done throughout the past few months, to allow for those peacefully and lawfully practicing their first amendment rights while also working to prevent any violence or destruction of property,’ a statement from the Department read.

Those paying tribute to Foster linked up with a separate rally to ‘amplify Black Austin voices and demand defunding of the Austin Police Department’ which moved through the city.

In a video shared to Twitter by Nate Kidwell, officers on horseback and bicycles were seen controlling crowds shortly before sundown as they moved down the street.

Some protesters started to clash with cops, spooking the horses and causing a commotion.

‘F**k you!’ several activists were seen yelling at the officers, as those on bikes rode in quickly to assist.

Meanwhile, police issued a warning to locals living in the downtown area to be ‘on guard’ amid rumors activists could break into high-rise residential buildings and stage rallies from rooftops.

Two police helicopters were reported to be circling over the city at 8pm.

While there was no reports of violence early in the evening, cops and protesters did clash at Foster’s memorial site. In a Twitter video, one activist was heard yelling in a megaphone that cops were ‘f**king pigs’, as some agitators became involved in a scuffle with officers.

After sundown, a wall of police officers with shields were seen forming a protective barrier in the city’s downtown. 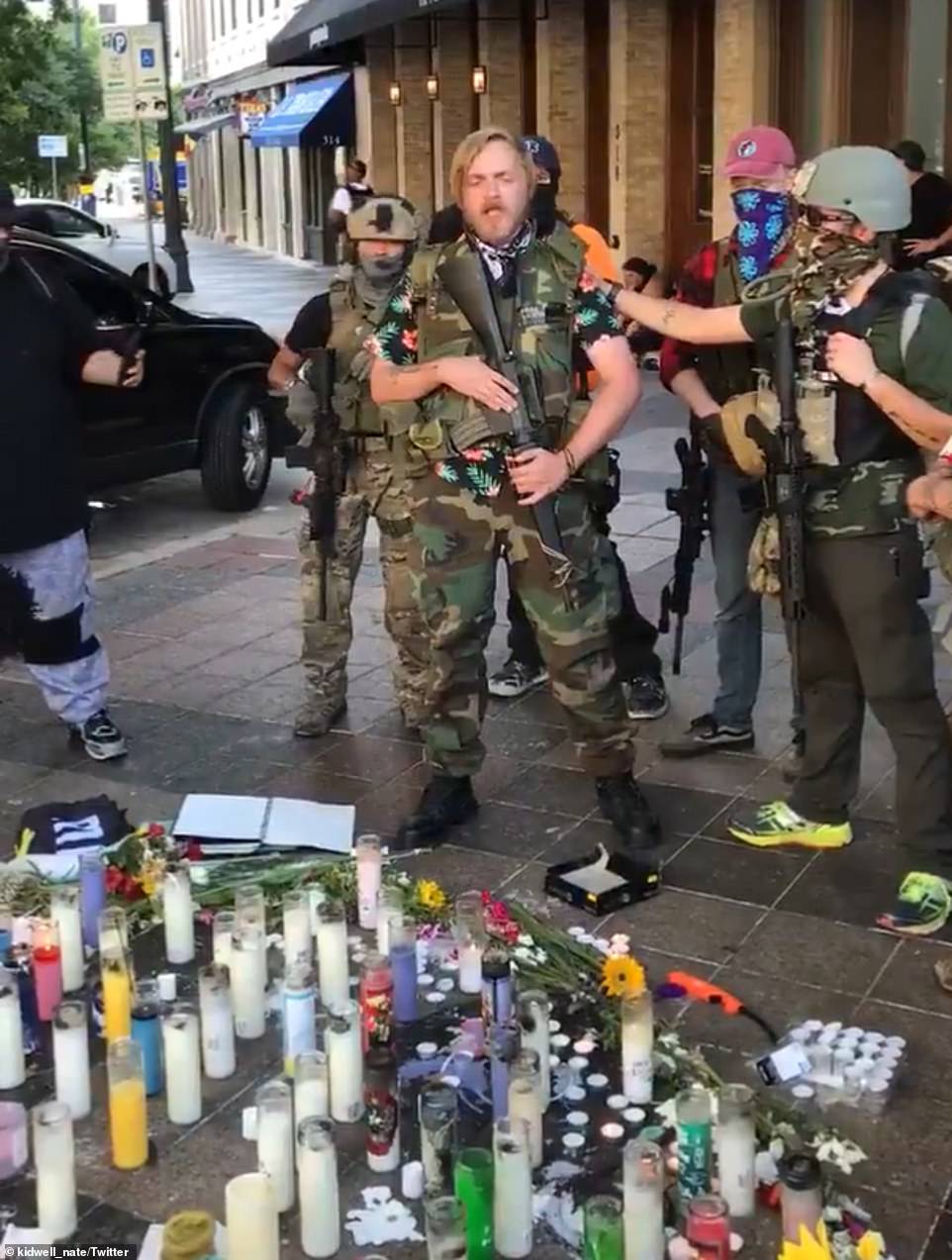 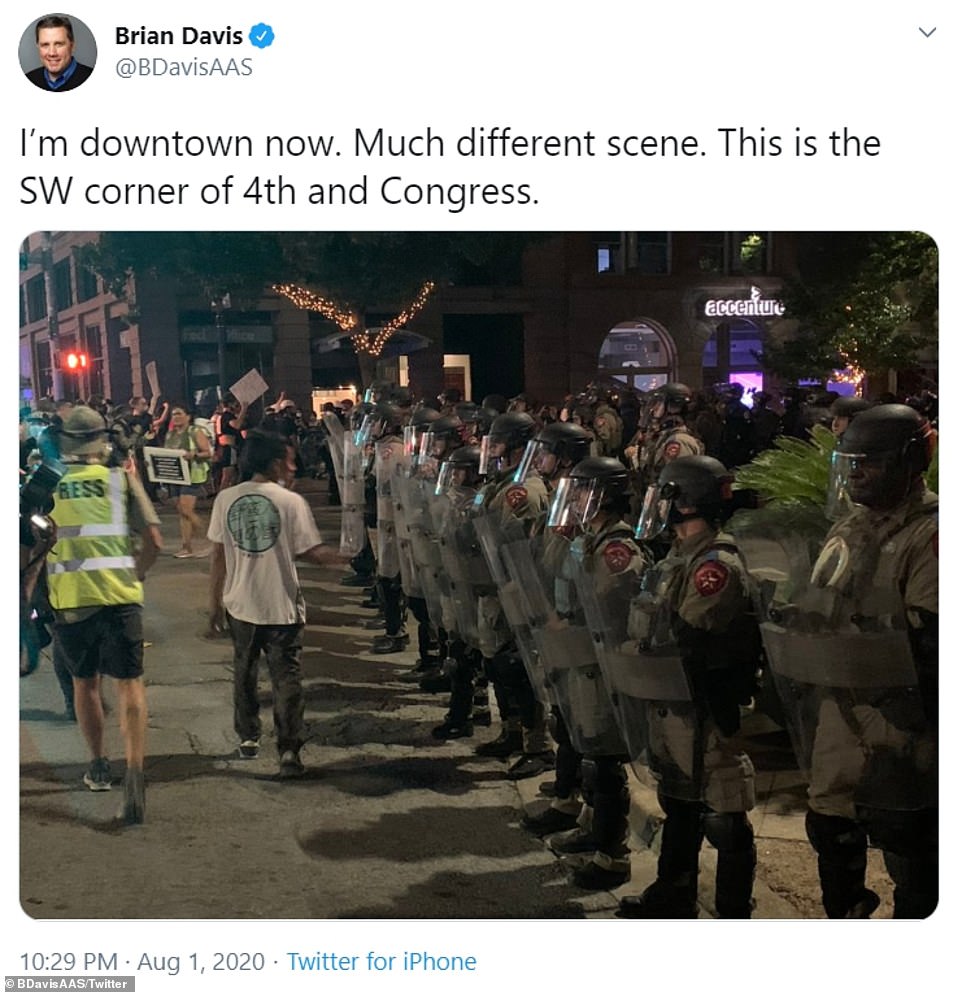 Austin is on high-alert following the shocking slaying of Foster at the BLM march last Saturday night.

Army Sergeant Daniel Perry, 33, opened fire on Foster after  driving into a crowd of demonstrators.

Perry claims he came across the protest by accident while working as a ride share driver, and that he only opened fire in ‘self defense’ after Foster allegedly waved his AK-47 at him.

A memorial was quickly established in the city complete with flowers, candles and tributes. However, the memorial was damaged by a right-wing activist who claimed Foster was a ‘terrorist’ who was ‘rightfully and legally euthanized’.

The vandalism has further fueled tensions in the city. 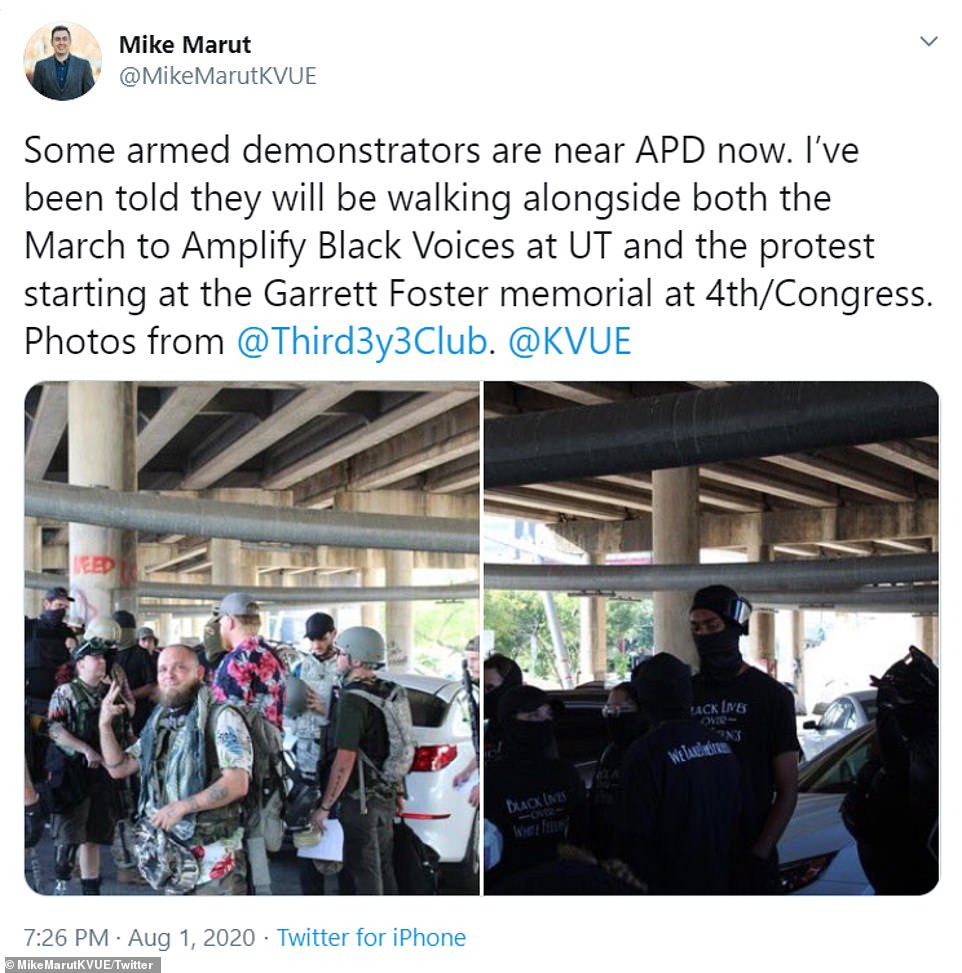 On Saturday evening, a group of gun-toting men said they were seen ready to march with and protect BLM protests 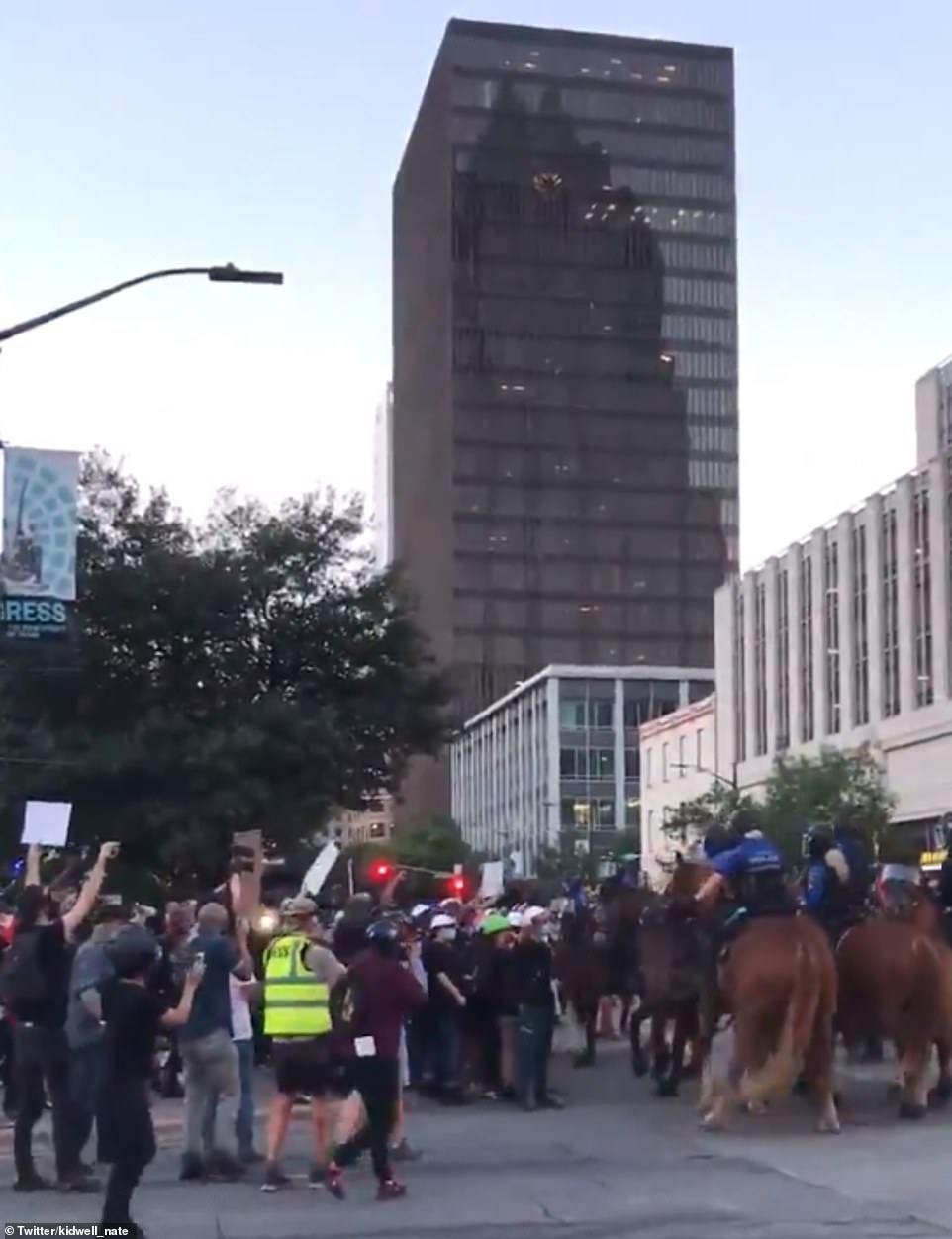 The Austin Police Department released saying they have called in extra cops to help protect both people and property should things go awry. Officers on horseback were seen patrolling crowds before sundown on Saturday 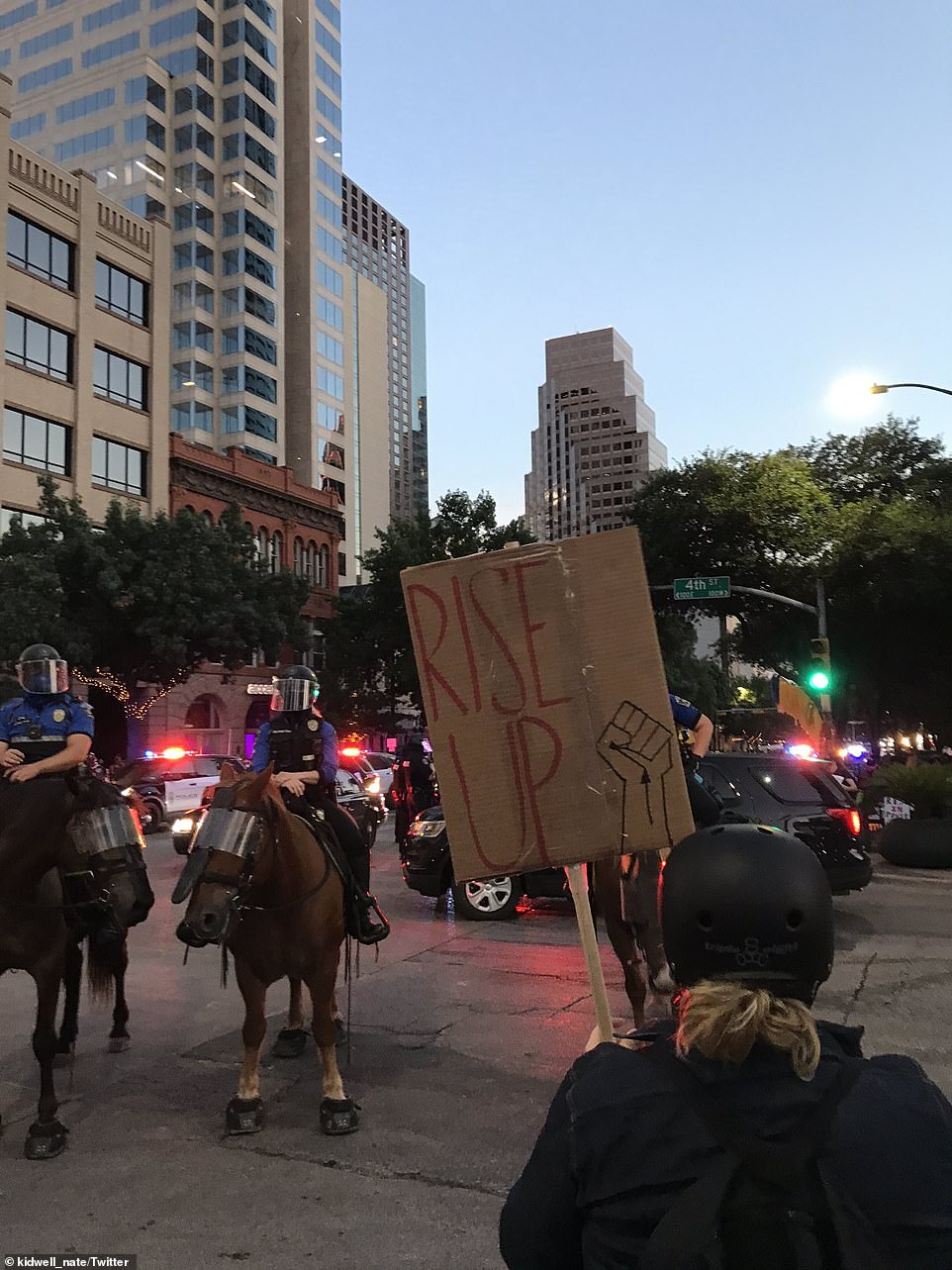 Perry claims he came across the protest by accident while working as a ride share driver, and suddenly felt threatened amid the large crowd.

Garrett Foster – who was marching with his disabled fiancée Whitney Mitchell – was armed with an AK-47.

According to Perry, Foster began waving the weapon in his direction, causing him to pull out his own gun and shoot Foster in self-defense.

Foster, 28, a former US Air Force mechanic, was shot  three times and later died in his hospital from injuries. 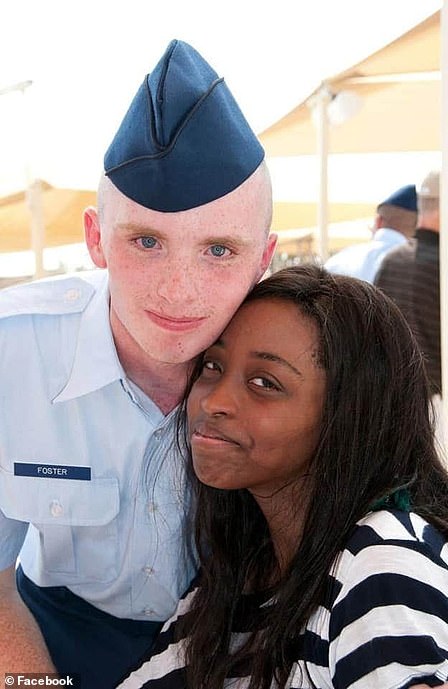 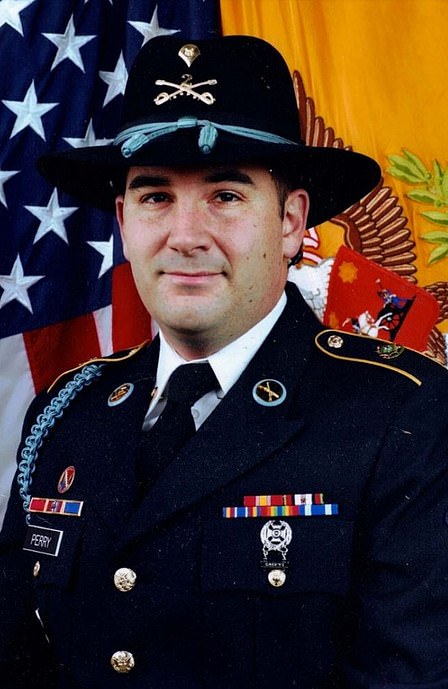 Shelia Foster, Garrett’s mother, said her son had previously served in the military and described him as a man committed to social justice, who had peacefully protested almost every night for the past 50 days with Mitchell 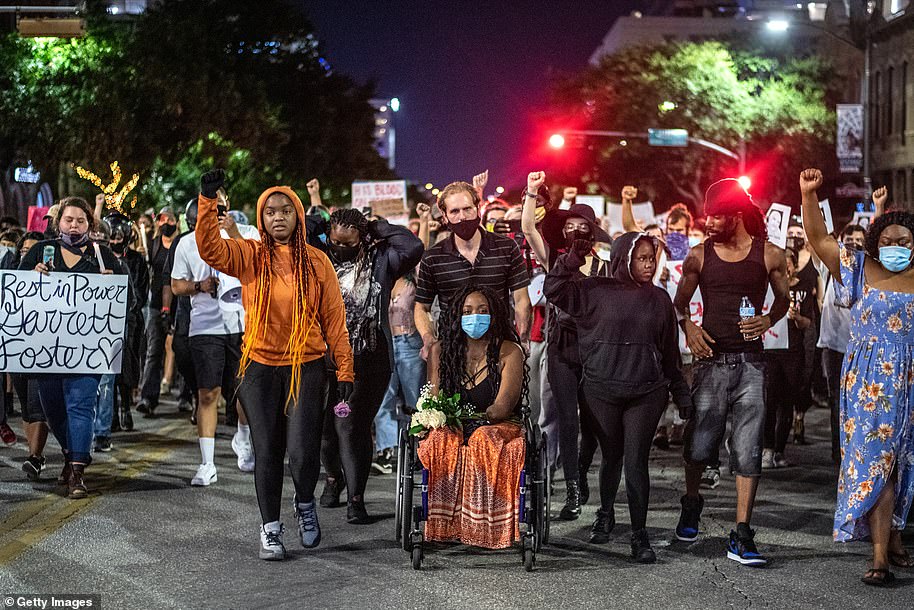 Foster’s fiancée Whitney Mitchell is seen center during a memorial march for her late partner, one day after he was shot and killed