‘You could really think it is not being used correctly’: Barcelona boss Quique Setien slams LaLiga officials’ use of VAR after Real Madrid profited from three close calls in win at Real Sociedad that saw them go top

By Max Winters For Mailonline

Barcelona manager Quique Setien has slammed the use of VAR in LaLiga after bitter rivals Real Madrid took advantage of three close calls to go above his side in the title race.

Goals from Sergio Ramos and Karim Benzema ensured Real went to the top of the table with a controversial 2-1 win over Real Sociedad on Sunday night.

The spot kick awarded to Zinedine Zidane’s team, later converted by Ramos, was certainly a dubious one and one of three close calls that all went Madrid’s way at the Reale Arena. 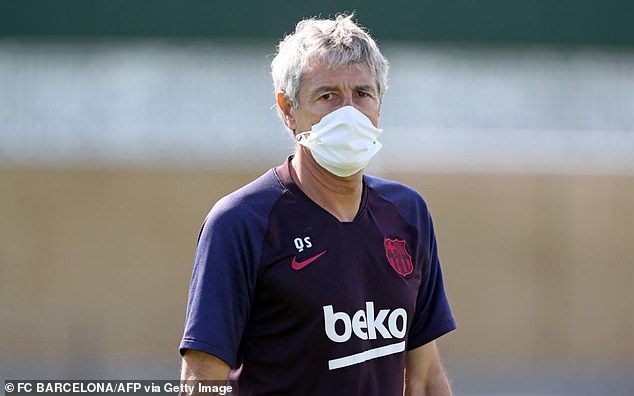 Vinicius won the penalty that put them ahead after his legs tangled with Sociedad defender Diego Llorente and he had been knocked off balance as he shot but there would have been few complaints had it not been given.

Real Sociedad thought they had equalised when Adnan Januzaj found the back of the net but Mikel Merino was adjudged to have been offside in the build up, a decision former Real Madrid and Barcelona player Bernd Schuster called ‘ridiculous’.

Then came a third controversial incident as Benzema turned in the second goal, and eventual winner, on 70 minutes. The Frenchman had controlled the ball with his shoulder before firing through a crowd of players and into the net.

Sociedad’s players claimed handball but Benzema pointed to his shoulder and the goal stood. It helped Real go ahead of Barcelona on their superior head-to-head record with eight games left to play this season. 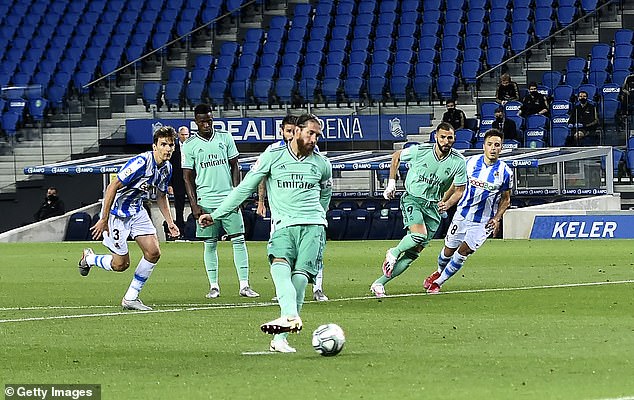 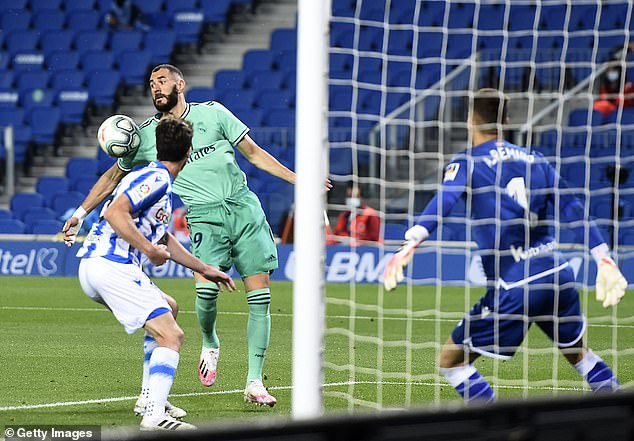 And a frustrated Setien took aim at the use of VAR by LaLiga referees ahead of their game against Athletic Bilbao on Tuesday, insisting it is ‘not being used correctly’.

‘There are things that we cannot control and that do not depend on us. Everybody saw what happened in Anoeta and everyone will draw their own conclusions,’ Setien said.

‘It’s understandable that we think why there are some actions that are reviewed, the referee himself reviews them and they don’t do the same in other plays.

‘They do it on some matches and in some others (they don’t). So you could really think that (VAR) is not being used correctly.

‘We’ve been here for many years and this doesn’t change. It’s always the same, the controversy will always be there.

‘VAR is a tool that can make us better, but we have to use it to have a clearer view of reality.’